SHAWMUT--Jeffrey L. Marshall, 67, of Shawmut passed away January 9, 2022, at Maine General Medical Center in Augusta after a brief, but courageous battle with AML Leukemia. He was surrounded with the love of his family.
Please visit and read his full obituary and take a moment to share your thoughts and memories with his family at the funeral home's website. A Celebration of Life will be held on February 20th, from 1pm to 4pm at the Waterville Elks Lodge.
Tweet 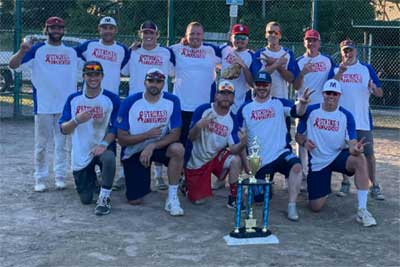 Here is a photo of the mens slow pitch softball team Grondin’s Boyz.  This team hails from the Biddeford Mens Softball League.  They took home the Maine USA Softball Class D, mens slow pitch State Tournament Championship on Saturday, July 10th played in Augusta.  The team name played in honor of the long time player, manager and softball activate in Biddeford, Steve Grondin who passed away a few seasons ago.

Many of the players on the teams he ran over the years and guys he mentored have gone on to enjoy the game of slow pitch softball at various levels throughout the state. It’s a great accomplishment to have a team out of Biddeford join the ranks of State Champions in USA Softball of Maine. More information about Steve Grondin- Steven Grondin Obituary (2018) - Biddeford, ME - Journal Tribune (legacy.com)